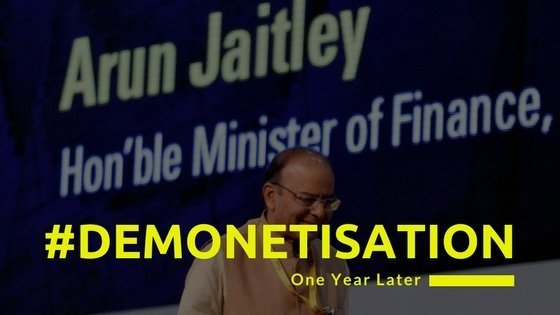 On November 8, 2016, in a historic move, the government of India announced demonetization of Rs 500 and Rs 1,000 bank notes. While the government and related bodies claimed that the move is an attempt to clamp down black money and reduce the extent of parallel economy while promoting digital transactions, the move received mixed signal from people from different walks of life. While some believed the move could bring in positive impact over the long term, many concentrated their focus on the challenges over the short-term that disrupted growth to a certain extent.

We, at Sqrrl, thought to take a stance of economic situation on the eve of one-year anniversary of the bold move.

We believe that with 86 percent of total currency in circulation turning invalid, the move resulted in increased adaptability to digital payment channels. Making this a strong base, government also announced several sops that could attract more digital transactions and also launched payment methods such as UPI and the BHIM. The digital mode of payment surged by over 50% since demonetization, which was far higher than growth during previous years.

Further, the move towards digital economy will make transactions easier, transparent, secure and fast while creating employment opportunities. Further, with huge amount of cash returning to the banking channel could provide banks with a muscle power to reduce lending rates which in turn could help in pushing stalled infrastructure and housing related projects.

Furthermore, the move acted as a booster for the Jan Dhan Yojana whereby the financial inclusion aim of the government saw some push as huge amount of money was deposited in accounts that were never utilized. We believe with increased usage of Jan Dhan accounts, it could now become easier for government to pass on the incentives and subsidies intended for the underprivileged sections of the society by directly transferring funds to the Aadhaar-linked bank accounts of the beneficiaries.

On the flip side, we believe that move will have no or limited impact on curbing black money but it certainly has achieved increased compliance as the number of tax returns filed by individuals shot up 25.3 percent as over 9 million people are now added to tax bracket. Over the long term we believe this could result in significant cash flow to the exchequer that should be ideally available for social and economic development projects.

One key development which demonetization as an exercise did was to inculcate a shift in habit of investments among individuals. While bank deposits offered nominal returns, investors explored alternative and attractive investment avenues whereby equities and mutual funds emerged as clear winners. A major chunk of inflow was experienced into equity funds and a significant shift of retail investors towards high yield instruments such as mutual funds were seen. Mutual funds attracted money from investors with assets under management (AUM) of the industry touching a new high of Rs 21.41 lakh crore. During the first seven month period of the current financial year, the industry witnessed cumulative flow of Rs 1.51 lakh crore which was nearly four-times inflow received during the same period in previous fiscal. The chart below shows the shift in investing pattern since demonetization. It clearly indicates a shift in investing pattern for investors. Lastly, we believe that the impact of such massive activity would certainly take some time to reap benefits in a huge economy like India. Thus, it would be prudent for us to take a long-term view for analyzing the outcome of this measure in its entirety. At Sqrrl, we recognize the dynamic nature of the young millennial crowd and thus with our app-based investment platform we seek to help India save their earnings while keeping things simple. With Sqrrl, it’s not about putting away large chunks of your salary but small sums just with a couple of clicks! To this we invite you to check our exciting app on Apple and Android app store and together we can Bring Your Own Dreams to reality.