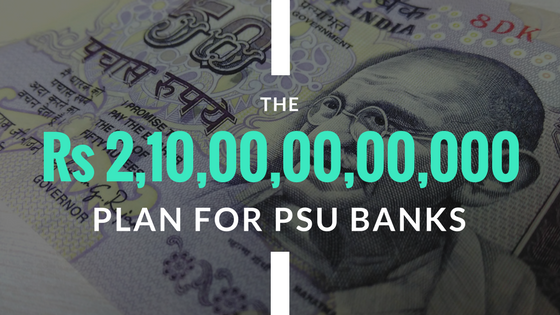 At a time when the stock market is rocketing sky high with new records every alternate day there was very little to cheer for the banking sector. Particularly the public sector banks. All thanks to the rising Non-performing assets (NPA), which resulted in low loan book growth thus, having a ripple effect on profitability. Amidst this scenario, all credit goes to the government for scoring a sixer of a bouncer by announcing massive PSU bank recapitalisation plan on October 24, 2017.

We, at Sqrrl, took a quick deep dive into the plan, government’s offer and its economic impact. Over the last few years, asset quality of PSU banks deteriorated rapidly as the projects funded either could not generate viable returns or were stuck due to reasons including stringent government regulations such as environmental issues, etc. As high as 10 percent of the loan book was declared NPA in fiscal 2017. This is when RBI took measures to improve transparency and mandated banks to declare asset quality situation in the open. In certain cases, the NPA exceeded shareholder’s equity whereby the banks were instructed to be extremely cautious about any other incremental lending.

What Does it Mean?

We believe with the recap plan, the government boldly came out and demonstrated its firm willingness to stand behind large banking franchises. We believe the impact of the move could be very positive as the quantum is adequate to take care of incremental provisioning requirements and to provide some growth capital for additional lending. However, it is important to note here that the banks should not address lending requirement in line with the broader system of creditworthiness as it would help banks’ improve their asset quality.

In terms of equity, we believe the recap could surely bring in investor confidence which would help the valuation metrics to improve (in certain cases where the P/B is less than 1 could be addressed well).

From an economic perspective, we believe reach and distribution of PSU banks is very critical thus making it an important source of funding for the large section of the economy as evident by their dominant market share. We believe this additional capital could prove to be a booster for segments such as SMEs, rural businesses etc. which were starved for capital necessary for growth. Further, the recap along with infra projects encompassing roads and waterways announced by the government on the very same day seems visible over the medium term.

To conclude, we believe the recap move coupled with other structural reforms viz. bankruptcy code, Goods and Services Tax, RERA and Direct Benefit Transfer set the base for re-acceleration of India’s growth momentum over the medium term.