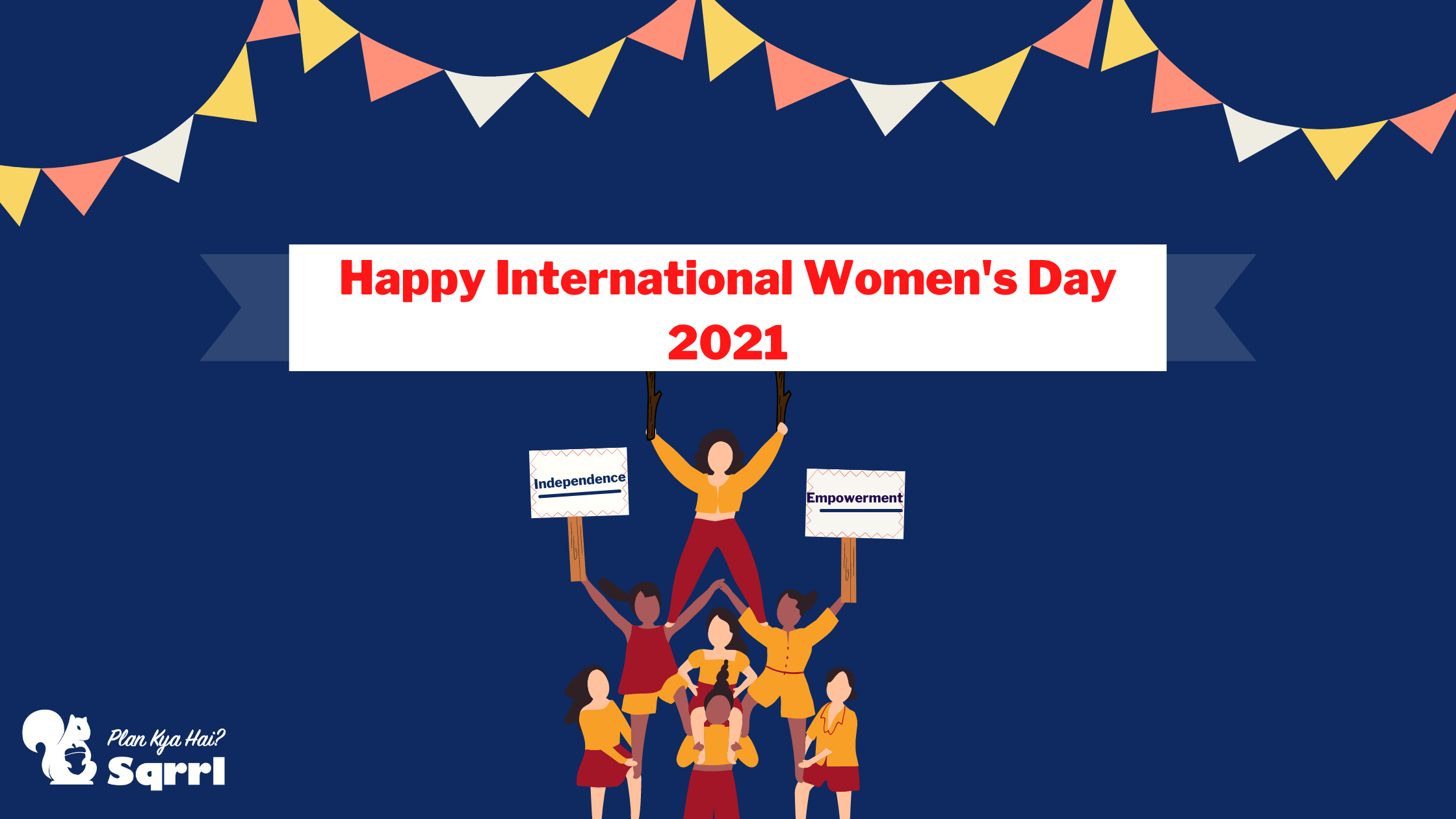 International Women’s Day 2021 is here and it’s the perfect time to talk about the sensitive (and not-so sensitive issues) pertaining to women. A question that is asked repeatedly is why do we need to celebrate the joys of being a woman on one special day every year rather than everyday? Our answer to that would be that changes take time. They really do! Think about it, 20 years back the world was a much darker place for women. Their voices were deemed less important, their opinions less sensible and no matter what, they had to be perfectly feminine and beautiful (whatever, that means?).

Over the years a lot of dialogue has been created and to be honest, it will take time but better late than never! With the changing times, the growing awareness and the feminist movements, we are seeing a slow change in the structure of society. Along with the political dialogue, there has been a change in the economic dialogue as well. And we are here for it – here to see the world become an equal place for men and women. Till then, we will take up every single opportunity to speak out loud about the issues of women, today and every other day. Over the last 3 decades, we have seen the government introduce various schemes for the benefit of women.

What are the schemes that the government has introduced to empower women?

In light of International Women’s Day 2021, we will take a look at how the scenario has changed over the past years, and how the Budget 2021 aims to empower women.

The most famous government scheme with regards to women empowerment is the Beti Bachao, Beti Padhao. It is a joint initiative of the Ministry of Women and Child Development, Ministry of Human Resource Development and Ministry of Health and Family Welfare. Let’s look at hard core facts related to it:

Aim: The scheme initially aimed to address the declining Child Sex Ratio (CSR) but has come to include gender-biased sex-selective eliminations, and propagating education, survival, and protection of the girl child.

Current progress: Beti Bachao, Beti Padhao (BBBP) has faced constant criticism with respect to the budget allocation. Statistics show that over the last few years, especially 2015-18, 56% of the budget allocated for BBBP was spent on media related activities. Last year, it was noticed that only about 25% of the funds actually went to the cause and over 19% were never released by the government in the first place. The actual amount allocated was Rs.644 crores out of which only Rs.159 crores has been sent to districts and states.

The success of BBBP has been partial. A lot of it can be attributed to the government’s faulty distribution of funds, with too much focus being given to media related activities. In the first phase of the scheme, the government discharged funds to 100 districts that had low child sex ratio, while in subsequent phase in 2016, another 61 states were provided with adequate funding. Out of the 161 states, the female child birth ratio increased in some states but 53 of them saw a sharp decline. This means that the government effort has shown results but there is a huge scope of improvement here. If only the funds were distributed in actual work, the results would have been starkly different.

This scheme is a part of the Digital India initiative. Ministry of Women and Child Development launched this scheme. The final goal of this scheme is to support ‘Make in India’ through an online marketing platform.

The scheme aims to support women entrepreneurs, Self Help Groups (SHGs) and Non- Governmental Organizations (NGOs) to display products made and services rendered by them through an online platform.

Reports from the UN global database for violence against women show that above 25% women in India go though some kind of physical/sexual violence from partners/ non-partners. One Stop Centre Scheme,  popularly known as Sakhi aims to fight that. The scheme will be funded through the Nirbhaya fund.

Current progress: Under this scheme, One Stop Centres have been made operational in each district of Punjab, where immediate emergency and non-emergency access to a range of services including medical, legal, psychological and counseling support under one roof  is being provided to the women affected by violence, irrespective of age, caste, category and religion.

Unfortunately, the government’s current expenditure on specific interventions that address violence women is not even 25% of the actual requirement. One constant setback that the One Stop Centres Scheme and all other Nirbhaya Fund schemes have faced is that the money allotted for these schemes is underutilized. Uttar Pradesh (U.P) has the highest number of One Stop Centres. It accounts for 50% of the cases reported to these centres, and has utilized a mere 12.5% of the amount of Rs 50.7 crore allocated to it over 6 years.

Although the rate of fund utilisation for Nirbhaya Fund schemes began to improve from 2018-19, annual budgetary allocations for many of the schemes now show a declining trend. In 2021-2022. In fact, 3 Nirbhaya Fund schemes under the Ministry of Women and Child Development, One Stop Centre Scheme, Mahila Police Volunteers and women helpline have been merged into a new overarching scheme called SAMBAL scheme, along with 4 other schemes for women. After the Covid-19 imposed lockdowns, there has been a grave increase in the cases of domestic violence against women however what’s sad is that the allocations for SAMBAL in 2021-2022 are 10% less than the total allocations for all these 7 schemes in the previous year.

A big hindrance that most people, especially women, face when they move from their native city/town/village to another is the availability of affordable and safe places to live. Started by the government of India, almost 50 years back, the scheme has come a really long way.

Aim: The scheme aims to provide convenient and safe lodging to women with day care facilities for their children in all urban/ semi urban/ rural areas. Under the scheme, help has been provided for construction of new hostels and expansion of existing ones. The hostels are available to any woman provided her gross income does not exceed Rs.50,000 per month in metropolitan cities and Rs.35,000 per month in any other place.

Current progress: Since its inception this scheme, over 952 hostels have been sanctioned so far and over 72,000 women have benefited from it.

5. STEP (Support to Training and Employment Programme for Women)

Aim: STEP aims to impart women with skills so that they can get employment opportunities. The scheme aims to benefit females above 16 years of age. The grant in aid under the scheme is given to the institutions/ organizations against NGOs.

Current progress: The financial assistance offered to women under STEP are:

Press Information Bureau of the government of India issued the last data record with regards to the progress of the scheme in 2014-15. Mrs. Maneka Gandhi, the Minister of Women and Child Development then approved around 23 proposals in 2014.

What is Budget 2021 offering to women?

On the occasion of International Women’s Day 2021, let’s have a look at how the Budget of 2021 impacts women. India’s first full-time woman finance minister, Mrs. Nirmala Sitharaman presented the Budget for 2021 last month. The FM claimed that the Budget proposals for this financial year rest on 6 pillars — health and well-being, physical and financial capital and infrastructure, inclusive development for aspirational India, reinvigorating human capital, innovation and R&D, and ‘Minimum Government, Maximum Governance’.

After the year of the pandemic, the government has concentrated much on building a healthcare focussed Budget for 2021. In the Budget 2021 Speech, FM Nirmala Sitharaman announced the launch of the Mission Poshan 2.0 scheme with the aim to strengthen nutritional content, delivery, outreach and outcome. Out of Rs. 24,435 crore, the highest amount has been allocated to the newly announced Mission Poshan 2.0 scheme.

Jal Jeevan Mission aims to universalize water supply facilities in both rural and urban areas. This budget has  allocated a massive amount of Rs. 50,000 crores to the programme. With this massive allocation, the main aim is to provide clean drinking water across households, even in the remotest parts of the country.

This huge step can greatly reduce women’s time spent on collecting water, especially in remote areas where they have to walk for miles and miles to get access to clean drinking water. A recent survey in 2019 shows that women spend on an average up to 55 minutes everyday to fetch water for the household. Women can use all this time and energy they spend here elsewhere, possibly somewhere they can earn. It will also improve household infrastructure for women.

Budget 2021 also aims to extend the coverage of social security benefits for gig and platform workers. It is extremely important in the current times as these are emerging avenues of female employment in urban India. The IWWAGE report goes on to show how attractive these chances are for women and extending the social security coverage makes the sector even better.

The budget allocations under the social security schemes for workers show an increased allocation of Rs. 3100 crores under Atmanirbhar Bharat Rojgar Yojana – a programme launched as a new scheme to encourage new employment in post lockdown period by providing a fixed share of wages into the EPF funds.

Drawbacks of Budget 2021 for Women

Unfortunately, schemes like One Stop Centres, Swadhar Greh, Beti Bachao Beti Padhao, Child Protection, Pradhan Mantri Matru Vandana Yojana, Scheme for Adolescent Girls Scheme and Ujjawala have not been allocated anything in this budget. On the contrary their budget has been reduced to less than 10% of what it was combined before. In addition to that, the budget for Mission for Protection and Empowerment of Women has been reduced from Rs. 726 crore to Rs. 48 crore.

This concludes our blog post about the economic initiatives taken by the government of India to empower women all over. Wishing all of you a super International Women’s Day 2021 – stay empowered!