3 Questions about Bitcoin you were too embarassed to ask! 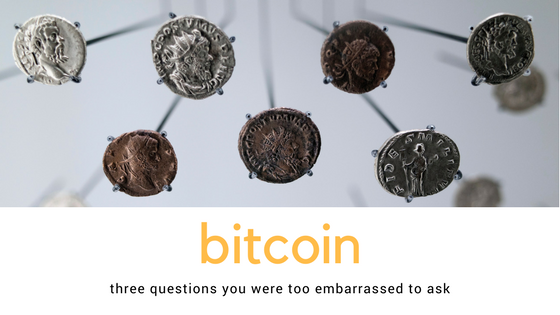 What makes Bitcoin different is that it is the first payment network that was completely decentralised. And it’s a peer-to-peer (P2P) system where individuals transact among themselves without the involvement of an exchange. These ‘bitcoins’ float against conventional currencies, with their value determined by supply and demand.

And before you ask, a bit coin does not look like a coin with a fusion of a ‘$’ and ‘b’. In fact it doesn’t look like anything because it’s completely digital.

Bitcoins are quite simply entries in the Bitcoin blockchain. If you own some, it means that you have cryptographic ‘private keys’ stored. Either on your computer, or an external device, or printed somewhere.

How did they get so valuable when they’re not even tied to a currency?

When bitcoin was first created in 2009, they were hardly worth anything. The lore says that the first transaction that occured was in May 2010, when  supposedly 10,000 bitcoins were traded for two pizzas.

But as the bitcoin bubble started to grow, the value of the currency climbed steadily. With the first real media coverage beginning when in April 2011, its value had climbed to 1$.

The rise from 1$ in April 2011, to about 11,000$ in December 2017 saw a lot of booms and crashes. The current one being when the currency grew from 200$ in late 2015 to the highest in recent days- bitcoin’s fourth boom.Every single one of these booms was backed on the same publicity and price loop. Media (like us here!) cover this unprecedented rise, which causes more people to know about it. And out of these some people buy some bitcoin. Rinse. Repeat.

It can be said, that bitcoin’s value is only going up because more and more people are placing a bet that it’s value will continue to go up over time. Only time will tell if they’re right or not.

How do I get some?

Before we tell you how to do that, you as an investor should understand quite clearly that an investment in bitcoin could give you massive returns or might erode to zero overnight.

Thus, we at Sqrrl believe, if an investor who is risk averse he should ideally not park his/her money in bitcoins and even if he/she is willing to take exposure it should not be more than 1% of the total portfolio. And even if you have a high risk apetite, please don’t invest money you can’t afford to lose.

Now, with that out of the way. Getting bitcoins is fairly easy. Go to a website called a Bitcoin exchange and set up an account. Use any electronic transfer method into your exchange account, and once your money is there, you can use it to trade bitcoins at the current bitcoin market price.

Once you have bitcoins, this is where it gets tricky. You have to make a decision on where you want to leave your bitcoins.

If you leave them with the exchange, there are chances you might lose them in case of a hack, mismanagement or even a fraud. There’s no insurance when it comes to bitcoins, so if your exchange platform loses your bitcoins, you’re simply out of luck.

On the other hand, holding bitcoins yourself can be risky too. If you crash your hard drive and have no backup, you lose your bitcoins. If you print them out on paper and lose the paper, you lose your bitcoins. And you choose to leave them in a web wallet and then forget the password, then again bye bye bitcoins. In case of a virus or hack on your computer, you could lose them regardless of how you store them.

There’s no way that is completely safe when it comes to holding bitcoins, and newbies to technology are at a higher risk.

We’re a platform that is dedicated towards helping the millennial generation of this country save, invest & prosper. Our app is built around helping the youngsters or anyone for that matter to plan their goals effortlessly. Whether it is about saving your spare change, or planning for your retirement, or saving money on taxes, you can do anything when you plan it with sqrrl.

Psst. our app is really amazing and we’ve just come out with v2. You HAVE to check it out, use this link!