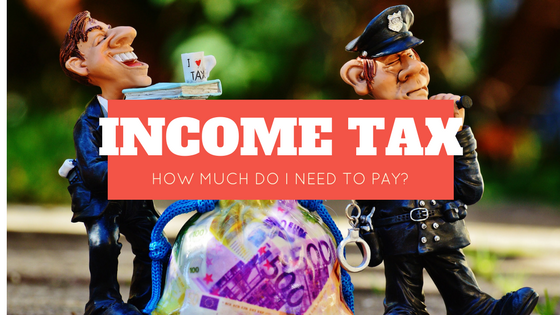 Every individual of a country is entitled to pay Income Tax based on the level of earnings if he crosses the limit set up by the government. As you Save and Earn, the government also needs to earn to run efficiently by means of taxes. Individuals who do not have ample income and not required to pay any income tax as they do not cross the set limits. However, most of the population of our country needs to pay taxes on their income, and thus need to calculate the amount of Income Tax that they need to pay in every financial year. In case you do any Online Investment with Mutual Funds platforms and get returns in form of interests or dividends, it is also known as an income, but there are certain incomes from investments in mutual funds that provide tax benefits.

But for now, below are detailed answers with the help of which you can know and calculate yourself the amount of Income Tax which you need to pay. Just to reiterate the common knowledge, the government of India allows a maximum of 1,50,000 in income tax saving, with the use of section 80C.

Income from salary needs to be calculated on the income of a person in a financial year (FY). You must collect all your salary slips from your employer and Form 16, which is also issued by your employer. After adding all the parts that construct your salary and are mentioned in the salary slip and in Form 16, go on to add any bonus received by you. All the amounts being added over here must belong to the financial year for which income for salary is being calculated. Once added, we arrive at the gross salary for the financial year, from which some amounts need to be deducted, which is exempted portion of house rent allowance, transport allowance to a fixed limit, and all other such reimbursements for which you are entitled to a respective limit.

This amount will be the net income from salary.

Income from House Property refers to the rent received by the assessee on the house let out by the house owner. You as an assessee will have to compute your Gross Annual Value (GAV) by following the laid down steps for the given financial period. You are supposed to take the higher value between the Fair Market Price of the property, and the Municipal Value, after computation of both these values separately. and this higher value is known as Expected Rent.

The Expected Rent is then compared with the rent received or rent to be received as house rent for the financial period. The higher amount between these two is considered as the GAV of the house. Municipal taxes paid during the financial year is deducted from the computed GAV of the house, and the resultant is known as NAV. Further, 30% of NAV less annual interest cost which is paid on any taken loan for the purpose to purchase that house, is deducted from NAV. The result tells us about income or loss whatever is obtained from House Property for the said financial year.

People Save and Earn, and utilize these savings to start a business of their own. Calculation of Income from Business/Profession is the trickiest and is better to be calculated by taking help from an expert or a professional. If the business is a small-scale and does not involve many transactions, or if the gross receipts from the profession are not exceeding a limit, it is okay to compute the Income from Business/Profession on own.

The amount mentioned in the business’s books of accounts as the net profit is taken as the base value and all the deductions which were availed by us in the making of the Profit and Loss account are deducted from it. You then need to deduct all the expenditures allowed to you under provisions of the income tax law. The mantra always is to Save Invest Prosper.

5 Income from Other Sources

After the incomes are categorized and computed under the heads mentioned above, some incomes might be left out, as they might not fit the description of these headings. These incomes are then categorized and computed under the head of Income from Other Sources. Income from gifts, in cases where it is taxable, income from dividends and interests and accrued income with other such incomes fall under this head. Usually, Income from Other Sources is either in the form of interests or dividends received by the assessee. You need to subtract any such deductions available to you under this head after adding all the incomes.

After you have computed your income under the respective heads by following the guidelines, you can go on to set off losses which might belong to the current year or might have been carried on from the previous year/years, up to the limit it is allowed. Usually, you can set off these losses from the same head, or even from other heads of income. However, in some mentioned cases, the losses which are carried forward from the past can only be set off under the same head, and cannot be set off with other heads of income.

The final amount at which we arrive after setting off losses is known as the Gross Total Income, which comprises of two parts, one which is taxed at normal slab rates, and the other which is taxed at special tax rates. After all this, the last step is to subtract the deductions under Chapter VI-A, and then we arrive at our Total Taxable Income. But never should the Total Taxable Income be in negative, at maximum it can be NIL.

The relevant tax rates are then applied to this Total Taxable Income according to Income tax slabs decided by Govt. of India for the concerned financial year. The amount now derived, is the amount of Income Tax you need to pay.