What is Dearness Allowance & How it Helps in Beating Inflation? 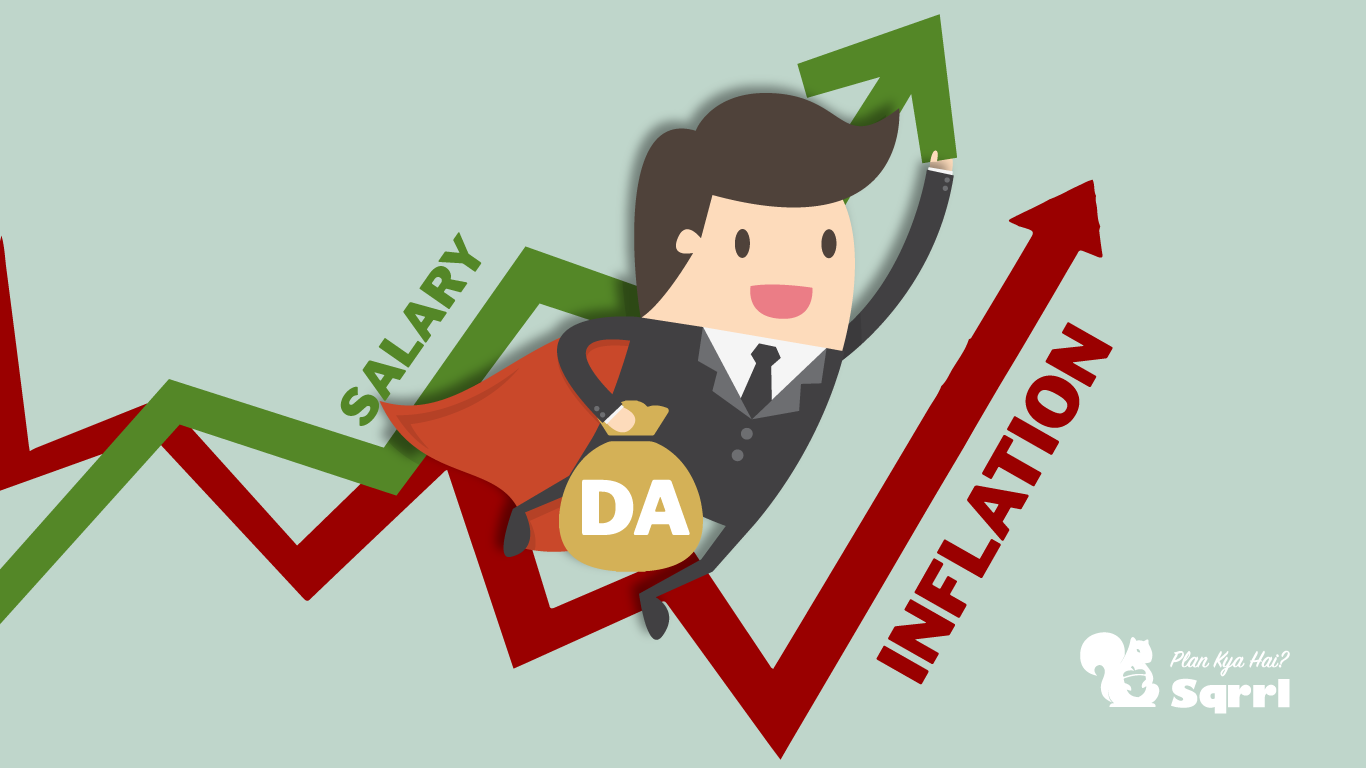 Let’s talk about our dads a little bit!

Most of our dads have worked in the same company all / most of their lives. Now, we want you to ask them two questions,

Chances are that there must have been a drastic increase in the fares – almost 2X to 3X. Now ask your dad a third question,

Chances are that you’ll get a big fat NO, as an answer. And this brings our today’s topic of discussion – Dearness Allowance (DA) into the picture. Let’s have a closer look at what it really is.

What is Dearness Allowance (DA)?

Dearness allowance can be defined as the amount paid by the employer in order to compensate for inflation. It is offered by the government to government employees, public sector employees and pensioners. India has been going through a period of inflation and it becomes necessary for the government to take into consideration all factors when paying their employees.

The amount of DA depends on the market movement which, as we all know, is very unpredictable. This is why it becomes important to understand that the government can compensate only to a certain extent in accordance with its estimates. This allowance is specifically offered to government employees because of the uncertain nature of their shifts and transfers from one place to another.

The idea of giving out DA began way back in time during World War II. At that point of time it was called Dear Food Allowance. It was offered to the employees by the government when they asked for wage revision during World War II. With the introduction of CPI, the calculation of DA was done on the basis of the Consumer Price Index (CPI). This very step led to the evolution of DA.

Consumer Price Index is the weighted average of the prices of items in one basket of consumer goods and services such as food, transportation and medical care. Changes in CPI is used in estimating periods of inflation and deflation. And given that DA was introduced for this purpose only, CPI becomes the primary metric when calculating DA.

Importance of DA in India

All governmental authorities have been restructuring and revising the DA as per their estimates of inflation over the years. It becomes really important to understand the significance of DA in a country like India. The main reason for this is the sub division of India into Metropolitan cities, Districts, Towns and Villages.

The sub division means that an individual’s cost of living can vary from one place to another depending on their transfer area. This explains why DA is necessary in a place like India. The DA in India is calculated twice every year. To be specific, DA here is calculated in January and July. The formula was revised by the Indian government in 2006 and is now being followed. The following are the calculations:

The DA received by an employee is fully taxable under Income Tax laws. The DA is to be charged as specified in the Income tax act. In case, the employees of a company are provided with rent free accommodation that is unfurnished wherein all prerequisites are met, Dearness Allowance is a part of the salary including the retirement benefit salary.

And the effect is seen in almost every component of the salary slip. Because all the components of the salary slip are, more or less, dependent on the Basic salary, changing it has a trickle down effect on all of them including the DA. This comes as a breather for retirees to help them account for the inflation they have to undergo over the years.

There are mainly two types of DA that are offered by the government.

Pay commission is set up every 10 years by the Union Government, in order to make changes in the pay scale of the government and public sector employees. The commission reviews and make recommendations on the overall pay structure for everyone. Even the states, once it’s approved at the center level, adopt the recommendations with or without minor modifications.

The changes in the basic pay produce a trickle down effect on the salary slip and in turn change everything including DA and House Rent Allowance (HRA). This is how the pay structure (including the DA) for employees gets modified from time to time. Thus, DA becomes an important feature in understanding the intricacies of your salary slip.